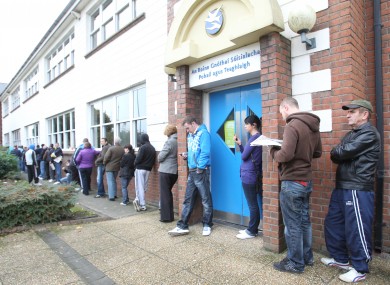 CSO figures released today show a rise in employment in Ireland. There was an annual rise of 3.2% in the year until the third quarter of 2013, bringing total employment to 1,899,300.

Stephen Kinsella, Lecturer of Economics in the University of Limerick, tweeted the following: “Unambiguously good news for Irish labour market: emp. up 58k in year to 2013:Q3, unemployment down 41.7k”.

According to the Irish Times, Minister for Social Protection Joan Burton said: “There are still far too many people out of work, and tackling unemployment will remain the Government’s number one priority, but these figures demonstrate that we are making steady progress”.

Precocious children on the toy show

Why can’t RTE find some nice, well-mannered young fellas who will talk about how they like football and want a Man United jersey for Christmas? Instead we get children like John Joe talking about horology in a manner deserving of a solid slap. The rest of the Toy Show children all blur into one irritating, cheeky, only child-type. It’s a child with “surprising” interests in “kooky” topics, who has learned a few big words and will say something mildly insulting to Tubridy. I blame the parents.

The Coke ad has been on

Every November Facebook and Twitter alight with simpletons telling us “OMG just saw the Coke ad”, or words to that effect.  Even though the ad is run at the same time every year, people still get excited about seeing it. It’s the same thing as getting excited about the clocks going back. If you need a drinks company to tell you when Christmas is coming, you are more than likely a moron.

“Hilarious” campaigns for the Christmas number one

In Ireland and the UK – countries where protests are generally met with derision from the public – you can always rely on people to get worked up about an X Factor winner taking the Christmas number one. In 2009, Rage against the Machine’s “Killing in the Name” was Christmas number one following an online campaign. A campaign conducted largely by idiots. Of all the things to get worked up about, people decided to “fight the system” by seeing to it that the middle-aged, dreadlocked Zack de la Rocha took the Christmas top-spot. Incidentally, I find white men with dreadlocks considerably more offensive than any X Factor winner.

The wise men and their star

There will be a considerable chunk of people who will agree with me that Christmas is not about consumerism, global corporations’ advertisements or the Christmas number one. They reckon it is about a group of wise men following a star and finding a family in a shed with a baby. It’s a nice story, but they may as well try to tell us Christmas is all about a young boy called Jack who bought some beans at the market that turned out to be magic. Actually, that’s probably a better fairy tale. I mean, Jesus never killed a giant.

Education minister Ruairí Quinn has once more defended the decision to abolish the current Junior Cert state exam in favour of a new model.

The new model will be focused on internal assessment, and requires teachers to mark papers instead of the exam being externally reviewed.

During a question time in the Daíl, Ruairí Quinn defended the Junior Cycle reform that starts next September by saying that students “Don’t need a state exam, they need progress and moderation” .

Minister Quinn was responding to the results that came in a recent ASTI survey which revealed that 50 schools do not feel equipped enough to roll out reform.

Minister Quinn said “I’m aware of the difficulties faced by teachers, especially in the backdrop of the current public finances… we have started a journey, I take the political responsibility, and where we will travel is open for discussion”. He continued “to have a state exam at 15 has a detrimental effect on a number of people. If changes need to be made, we will make those changes”.

The decision to change the Junior Cycle has come under criticism, especially from the ASTI president Sally Maguire, who said that “every student is entitled to a fair, impartial and transparent state certificate to record their achievement.  A school certificate based on grades awarded by student’s own teachers’ does not have the same status or validity as an independent State Certificate.”

This year’s Junior Cert will be one of the last under the current model which has been in place since 1991.

The dispute arises over an agreement to address the €1.6 billion deficit in ESB’s pension scheme with Mr. Kenny hoping that unions will meet on Thursday and that they will “engage fully and comprehensively” in the talks with the ESB.

The Taoiseach said that the dispute was not about wage cuts while continuously insisting the ESB pension fund is in good shape.

Fianna Faíl also came out in opposition against the possible strike. A spokesman said that “there is a genuine fear and anxiety” amongst business’ and the most vulnerable people of society.

Speaking to News Anois, Brendan Hennessey of Saint Vincent De Paul warned of the effect that this strike could have on the most vulnerable in society, especially the “elderly people in isolation who rely on electricity for heating and can’t get or carry alternative heating such as coal”. Hennessey also that those who rely solely on electricity might need to turn to “unhealthy alternatives such as fast food” in order to feed their families. 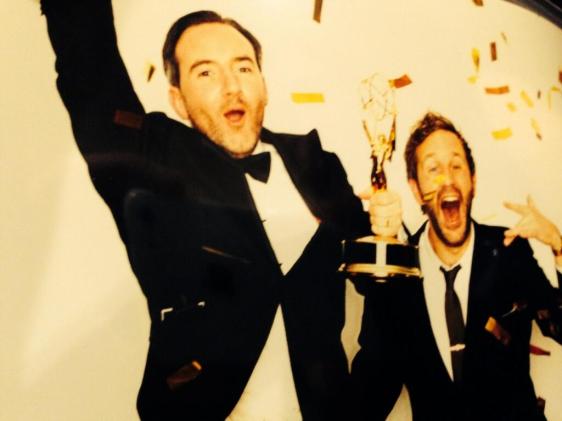 The play, which will be an adaptation of John Steinbeck’s Of Mice and Men, will star O’Dowd as the dim-witted Lennie in the tragic tale of two labourers in 1930s California.

The play will run April through June at the Longacre Theatre in New York, with the opening night on April 16th.

Franco, star of 127 Hours, will play his wiser sidekick George.

It has been almost forty years since the tale appeared on Broadway in 1974.

O’Dowd, who won last night the Comedy Award at the International Emmy Awards, happily tweeted: “We may have won”, accompanied by the above image.

He picked up the award with his fellow Moone Boy writer Nick Vincent Murphy, who O’Dowd said “was the best writer working in the UK.” Reacting to the win, Murphy said: “It’s insane we won this thing.”

In a recent interview with the Irish Independent, O’Dowd admitted that before he got cast in Bridesmaids, he was struggling financially.

“I was just really broke so we got our cable turned off and all that kind of stuff. It was weird. I was more broke than I have ever been in a way, because I was in so much debt. It was really scary.”

The number of officers is set to be raised to 2,500 over the coming weeks and will stay in place until after Christmas. The officers will issue penalty notices to people breaking traffic rules. Helmets and hi-visibility vests are not a legal requirement but officers will be pushing cyclists to use these safety precautions.

The clamp down on cycling safety comes as a result of six deaths over 14 days in London. Each incident involved a lorry, bus or coach.

The incidents in London have caused widespread recognition of the importance of cycling safety and the controversy of mandatory bicycle helmets. A spokesperson for Cycling Ireland said “there is no doubt that wearing a helmet saves lives. However, it is important that the onus of safe cycling is not solely on the cyclist”.

Boris Johnson caused controversy across the cycling world by stating he wants to ban the use of headphones while cycling. This ban would encourage cyclists to become more aware of their surroundings and potentially lessen the amount of cyclists killed on public roads.

Ireland does not currently have laws regarding helmets, hi- visibility wear or headphones while cycling. Dan Martin, an Irish profession cyclist for Team Garmin- Sharpe, said “The blame/claim culture means if you don’t wear one [a helmet], the first thing they will say when you crash is ‘were you wearing a helmet’ but until I was pro I never wore one.” Martin continued by saying the helmet can often create the illusion of invincibility in the cyclist and the real concern should be driver’s awareness.

He stated “it makes people think they are safe if they have their helmet on. When in reality it does very little. It will somewhat protect against fracture and abrasions but concussion they are useless.” Martin is required to use a helmet when racing and acknowledges the issue of headphones while out on busy roads: “I wore headphones once training and it scared the hell out of me. You don’t realise how much you use hearing on a bike”. Cycling Ireland agreed with the movement towards a safer cycling environment for Irish cyclists. A spokesperson for Cycling Ireland concluded by stating that “Increased awareness should lead to fewer incidents, accidents are not caused by not wearing a helmet; they are caused by bad drivers or bad cycling”.

The Homeless Charity Trust has warned many more homeless people will die over the coming winter months due to a lack of emergency accommodation in the capital.

A man in his forties died overnight in Bray over the weekend while sleeping rough in the town.

The prediction follows the news yesterday that the number of people living rough on the streets of Dublin trebled in the last year.

The homeless action plan, Sustaining the Pathway to Home, is being conducted by Dublin’s four local authorities and will be implemented early next year.

The report states “the demand for access to emergency accommodation and related homeless services in Dublin is deepening”, while affordable and adequate housing remains extremely limited.

The draft also highlights the growing issue of people living on the streets for the first time.

One third of the 2,886 people accessing homeless services in the first six months of the year were using them for the first time.

These figures follow on from last year where over half of the 4,837 people using such emergency services were utilizing them for the first time.

The decision to move away from an emergency accommodation approach to a housing first solution to combat homelessness appears not to have aided the drastic situation.

Last year only 879 people “successfully moved away from homelessness back into independent living”.

Francis Doherty of the Peter McVerry Trust said that these figures would continue to increase as a result of rising rents in Dublin City despite the economic troubles of many Irish people.

In February the Minister of State for Housing Jan O’Sullivan announced the Government’s ambition to eliminate long-term homelessness by 2016.

Despite this, Government expenditure on social housing has been slashed from €1.3 billion in 2008 to €275 million last year, resulting in only 1,500 units being constructed annually for social housing initiatives compared to 8,000 previously.

Alice Leahy of Trust said: “The government is not accepting the fact that there is a need for emergency accommodation”, before declaring Trust cannot accommodate the high demand for places in its already fully occupied premises.

Doherty of the McVerry Trust was more optimistic, praising the new government initiative which allows people in financial trouble to receive rent allowance while working.

The next set of results, acquired two weeks ago, are expected to show another increase in people on the streets.